I was recently tasked with building a CI\CD pipeline for iPhone app. Not something I have done before, though I've been an Apple user for a number of years.

Company is a relatively dynamic startup, trying to use as much as possible hosted services vs doing it themselves. They were using GitHub as code repository, which obviously doesn't have it's own CI\CD part. But can of course integrate with anything that can git clone, and ideally receive a webhook request.

We needed a hosted CI\CD tool, so we didn't consider classic tools like Jenkins, TeamCity etc.

We need it to support:

We were a bit biased towards GitLab CI\CD, so would ideally use it if it gave us what we need.

iPhone builds are done by XCode on macOS.

Apple has limitations on how and where you can run their OS. Hard bottom line is that it has to be on genuine Apple hardware.

There are no providers that spin up physical hardware programmatically, so you have to rent hardware and then can run your software on them.

As one of the consequences - AWS does not provide macOS EC2 instances, nor does GCP or Azure. Moreover Xen (used by EC2) doesn’t support macOS, and AMI import won’t import an macOS image. Even if you could, macOS might refuse to run on non-Apple hardware.

There are several specialized providers of Macs as IaaS. Some of them connect physical Macs and give access to them. This is not very scalable.

Tools were reviewed against 2 requirements:

Travis has been supporting shared macOS machines at least for 2 years.

They use MacStadium for macOS agents: https://www.macstadium.com/customers/travis-ci

If you are using a paid plan (say “Small Business” at $249 / mo, allowing 5 Concurrent jobs) you get macOS builds included in the plan, and not charged separately.

Supports your own macs (GitLab runner is written in Go and built for macOS too).

No support for hosted macOS runners at the moment - only Linux.

They are actively piloting though, also via MacStadium (as Travis).

Knowing their pace, I would give 6-12 months for the release of this feature.

Seems to have great support for macOS, including dev\build tools: https://circleci.com/docs/2.0/hello-world-macos/

No support for the moment, but they want:
https://help.appveyor.com/discussions/questions/28701-progress-for-macos

We are still working on macOS support in AppVeyor.

Only “Bring Your Own Node” and costs $25/mo. You must be kidding me!

We have decided to:

Caution: Don't do it at home. This was not meant to be used for any purpose other than academic. Travis guys might find me and shoot me in the leg.

So, Travis gives us unlimited minutes: https://travis-ci.com/plans
And it gives us managed macOS agents, which GitLab doesn't do yet.
Why not run a Travis agent continuously and use it as a GitLab runner? :) 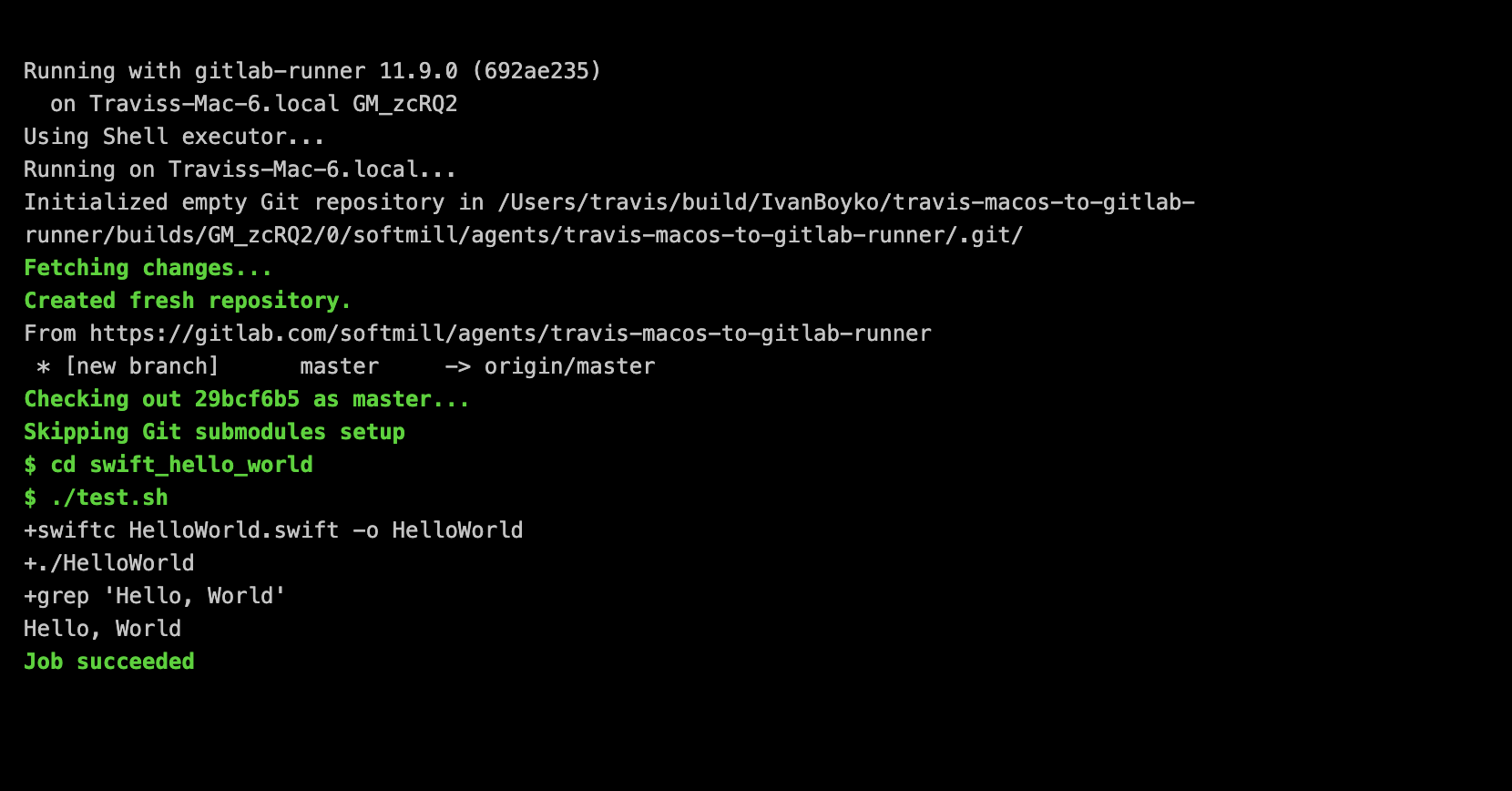 There is still a timeout of 50 min (public repos) or 120 min (private repos) for a Travis job. Travis supports “Cron jobs”, but the shortest interval allowed is “daily”, which isn't enough. I guess we can retrigger a build from the currently finishing build. Or find some other way to keep agent always available.

What it gives us: